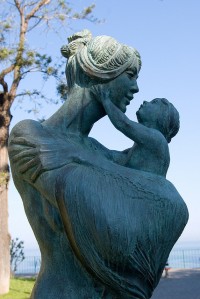 The latest endorsement for our soon-to-be-published book Hear Me, See Me: Incarcerated Women Write arrived this week.

It comes from Elizabeth Gaynes, J.D., executive director, of The Osborne Association in New York City. One of Osborne’s missions is to advocate for and develop alternatives to incarceration that respect the dignity of people and their capacity to change.

In particular, Osborne works to support and develop programs that keep mothers and their children together while a woman is serving her sentence.

..like JusticeHouse, a 45-bed program in Brooklyn announced this week that will allow carefully screened women with felonies to live with and continue to care for their children with supervision.

The participants will be visited several times a week by case managers, receive counseling about jobs, schools, and parenting. Some will be required to have treatment for drug addiction and mental illness.

The aim is to undergird and hopefully strengthen the mother-child relationship during this precarious time.  Children separated from imprisoned mothers are prone to fall into impoverishment, end up in the foster care system, or even become incarcerated themselves in later life.

JusticeHouse is one of the first programs of its kind the country, and hopefully one of many to come.  (We need such a program in Vermont.)

Here is Liz Gaynes again about the importance of keeping mothers and children together in the context of our book coming out this September:

In our work with children of incarcerated parents, we find that their greatest barrier to maintaining their relationship and strengthening their attachment to their mothers  is the pervasive belief that their mothers have little to offer them, and that children are better off without them. Through Redmond and Bartlett’s work, we hear the truth – that by explaining and not excusing the behavior that led them to prison, and by sharing the insight they gain about themselves as women and as parents, they can give their children the unconditional and fully expressed love that all children need. This is a message that is important for their children’s caregivers, and the judges, child welfare authorities, and prison officials who determine whether and how their relationships with their children will be sustained.

If you are so inclined, remember today the 120,000 mothers nationwide who celebrate Mother’s Day in a prison facility, unable to see or connect with their children, and the young ones who long to cuddle up in their arms. The Mother’s Day holiday is truly one of the most difficult for both.