I love the name of the report released this week by Vermont Works for Women – ENOUGH SAID!

..meaning enough chitter-chatter about the work and economic independence challenges facing young women and girls in the state, and let’s get to ACTION and change the trend.

(FYI, women are twice as likely as men to live in poverty, both in Vermont and nationally.) 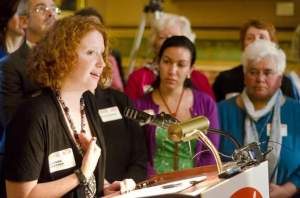 ENOUGH SAID – Young Women Talk about School, Work and Becoming Adults: Why We Should Listen and What We Can Do was released by Vermont Works for Women at the State House this week.

The nonprofit org, based in Winooski, helps women and girls recognize their potential and explore, pursue, and excel in work that leads to economic independence.

A bevy of high-profile speakers, including Armando Vilaseca, the Secretary of Education, and Beth Pearce, the State Treasurer, waxed eloquent about the concerns that young women articulated in the ENOUGH SAID report:

* lack of practical skills related to personal finance
* fears around how to live independently
* relational aggression among female peers
* few personal allies or networks to provide support
* minimal exposure to a broad range of careers and professional female role models
* limited expectations for work that taps into talent and passion.

The report incorporates national research and best practices and is the result of in-depth interviews, surveys, and listening to more than 210 young women and girls, ages 15-25, from 28 communities, Brattleboro to St. Johnsbury, the majority from families of limited financial means.

During the press conference, I couldn’t help but think of the 10 incarcerated women who formed one of the nine listening sessions that occurred at the Chittenden Regional Correctional Facility last December.

I helped facilitate that session.  I recall the ‘voice’ of a 22-year-old woman speaking to the issue of relational aggression among her peers and how this ‘mean girl’ dynamic had influenced her early decision-making negatively.

“I would really like to have more relationships with women,” she continued.  “In this facility if we came together, we could make changes.  We don’t advocate for ourselves because we are against each other.”

To attempt to bend the curve for women and girls in Vermont, 25 business, government and community leaders from across the state have committed to participate in a newly formed Task Force on Young Women and the Economy.

These folks will convene in late May with a six-month charge to develop a series of ‘commitments and partnerships’ to address the deficits outlined in the ENOUGH SAID report.  The group will identify effective efforts already in place; and recommend strategic investments in programming, or changes in policy or priorities.

The task force’s commitments will be announced publicly in December 2013 before the start of the next legislative session.

As Tiffany Bluemle, executive director of Vermont Works for Women, said at the presser: “Vermont will only reach its full economic potential if all Vermonters – including women and girls – can live up to theirs.

That includes the incarcerated women I was with just last evening.  Ninety-five percent of them will be released to Vermont communities within six months to a year; they will need employment opportunities, including a livable wage that will enable them to live independently.