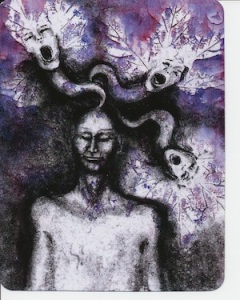 Some evenings when we write inside, the energy is palpable around the circle. Hands punctuate animated conversation. Side chatter resists slowing to whispers. Bodies bounce and squirm. At other times, the group files in as if under directive of solemnity or worse. This week was like that. Depression fairly seeped from fingers and hair follicles. What little energy reserves were in the room before group were used up so quickly we needed to end early. But for one writer. MG was so energized by the writing prompts, she had to be stopped after 20 minutes of focused scribing, her letters firm, determined, clear. She had something on her mind and this was her chance to share it:

I see a person who appears at ease; yet there are tunnels that lead to spiritual beings who are in a discontent – maybe sad or angry. It could mean a couple of different things. For one, it could be a diagram of how outside forces are always there attempting to bring you down and drive you into mayhem.  Yet all the while I experience this and maintain my composure, let nothing that is negatively oriented gain a lead on my psyche, allowing myself to fall into a trap.

Also it could mean that at times, in my head, I may think that what I’m doing is for the better interest of people, and that I’m only trying to relay a message of hope onto another. But the only thing I’m accomplishing is making another too self-conscious about themselves; because some people would rather be flattered than deal with constructive criticism that is just being straight-forward, trying to guide them in the right direction. They can become very overwhelmed with hatred for themselves. Although my intentions are good, I make others think that I’m mean or self-righteous.

I know my flaws and if I don’t, I appreciate when somebody points them out so I can correct them. Anybody that does that is more of a friend to me than, for example, someone who will let me walk around with a piece of lettuce on my tooth in front of my crush, because they think they are doing me a favor by sparing me the embarrassment. I never believed in that. I wish sometimes that people could understand that when I give them words of advice it’s not because I put myself on a pedestal and look down upon them; it’s because I see potential in them and I want every one on earth to be the best they can possibly be.