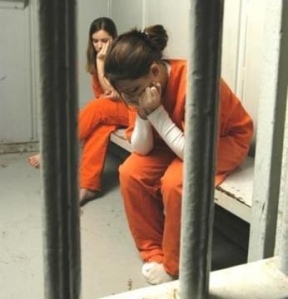 … so back to my recent hour-long conversation with nine female prisoners under age 22.

After traversing the pleasantries of ‘where are you from’ and ‘what do you want to be when you grow up,’ we dove into subjects such as work-related internships and apprenticeships that they wish were available to them in prison.

This was the number one request from this circle of young women.

We want to leave here having learned something, so we can find good-paying jobs when we get out, they insisted.

Earning certifications in plumbing and drywall were suggested.

Another expressed interest in day-furlough community service projects as a way to meet other people doing positive things.

(Remember in a previous post, these prisoners unanimously agreed that their unhealthy family/friend networks contributed to their getting back into trouble.)

A 22-year-old Vermonter who has been in and out of prison since age 16 added:

They (Corrections) put me back in the same place (prison) with nothing more than I came in with, yet different results are expected.  You expect me to get a job when I’m released, yet I don’t have the skills to achieve what you expect of me.

This is the daily Catch-22 for these women – make something of your life without the hands-on training and skill-building needed to do so.

And for the rest of us that lean toward the stance, lock ’em up and throw away the key, that’s really not an option.  First-off, we as states can no longer afford the costs of mass incarceration; our budgets are just too tight.

Secondly, every one of these 20-something women will be released within a couple months to a few years.  (Ninety percent of inmates get out eventually.)

So, we have to figure out this conundrum.