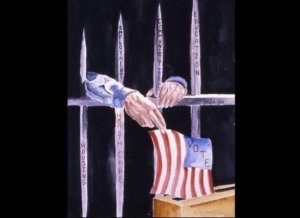 Vermont is one of only two states in the nation that allows incarcerated individuals to vote for elective offices by absentee ballot.  (The other is the State of Maine.)

More than half of U.S. states prohibit prisoners, as well as ex-offenders on probation and parole from exercising this vital right as citizens.  Still other states require a government petition or approval from a government board to have voting rights restored.

A 2011 study by the Florida Parole Commission found that ex-offenders whose civil rights had been restored were much less likely to return to prison than others in the released prisoner population, with respective recidivism rates of 11% and 33%.

Today on Election Day in the Huffington Post, Anthony Papa, a former prisoner incarcerated under the onerous Rockefeller drug laws in New York, writes this compelling argument for why ex-offenders’ voting rights should be restored:

Exercising the right to vote should be an important part of a prisoner’s rehabilitation. It’s an act that makes one feel whole again following years of losing those rights. If, through voting, individuals can become involved in the political process, they have a much better chance of fully integrating back into society.

I challenge you to read on…